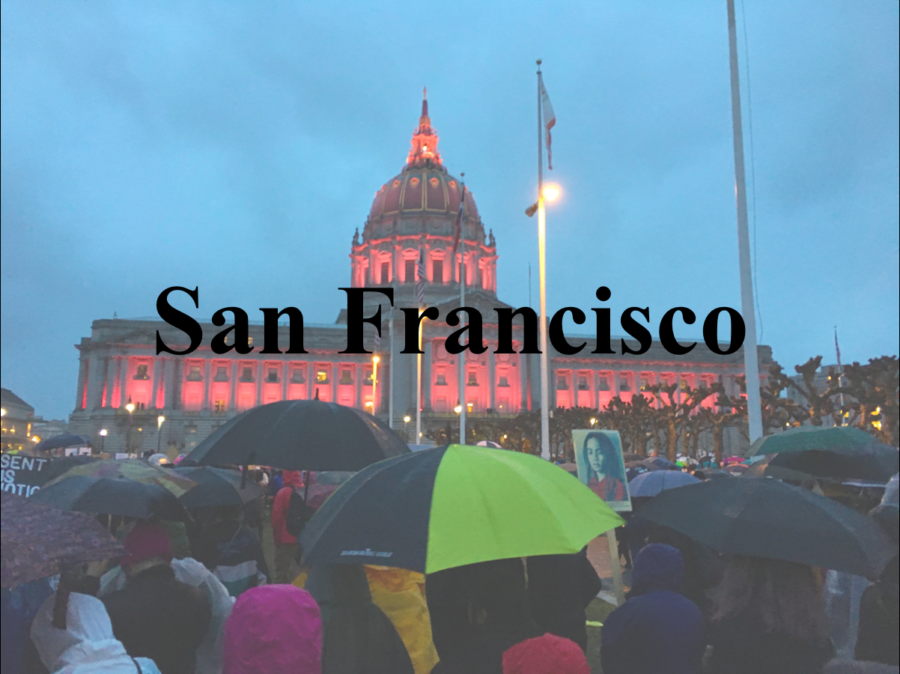 On Saturday, my friends, family, and I, alongside 50,000 other people in San Francisco, rallied around motivational speakers, performers, and marched down Market Street in support of women. Along with women’s rights, we marched for a broad spectrum of civil rights, from marching in support of Black Lives Matter, to supporting all immigrants and LGBTQ+ rights, to promoting kindness between people. 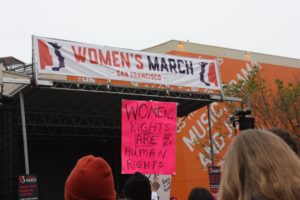 While sitting on the CalTrain and BART on the way to San Francisco, I witnessed people alone on their way to march with bright smiles because of their solidarity, as well as entire families accompanied by colorful signs. I’ve never been surrounded by so many people of different races, religions, ages, and other backgrounds before, all together for a single cause.

Walking up the steps toward the Civic Center, I could immediately feel a rush of satisfaction and a feeling that you are taking part in something important. The first thing I saw was a sea of pink crocheted “pussy hats” and signs that all said something different. Some were funny: “Carrie Fisher brought me here—she’s pissed,” and some were direct “respect existence or expect resistance,” but they all had power behind them.

The crowd, as we waited for the first speakers, was electric and kind and didn’t mind when you said “excuse me” as you tried to get to a visible spot of the stage. It was the complete opposite of walking through a crowd at a concert—these people didn’t look at you in frustration as you were trying to get by, they actually smiled in understanding.

When I got to a comfortable spot in the crowd, I happened to be right next to a family who had brought their infant daughter along.

“We’ve got to start her young. This is her future after all,” her mother said.

As the speakers began their talks, you could hear and see the crowd feeling empowered. They would chant as they agreed and boo when the recent rhetoric directed toward women was mentioned, but both were done with elegance and peace.

One of the speakers, Maria de Lourdes Reboyoso, gave her speech entirely in Spanish and whether you understood her with or without the translation, you could hear the sincerity and passion in her voice. She spoke on her experience as an immigrant and the discrimination she has experienced as a woman.The crowds’ enthusiasm as she spoke in Spanish showed the extremely diverse community that stood together in San Francisco at that moment.

The same peacefulness was shown through the messages on the signs. Although some were directed toward specific remarks from the new president, I was pleased that I didn’t see any that were quotes from rapper YG’s song “Fuck Donald Trump.”

We were there in support of civil rights, not to protest against one man. 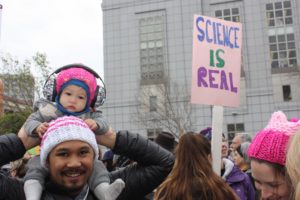 As we headed out to march, folk singer and civil rights activist, Joan Baez, sang a song with the lyrics “Ain’t Going to Let Nobody Turn Me Around.” The 50,000 of us sang along as the rain started to pour down and we marched down Market Street.

There was nothing stopping this crowd, especially not the rain. All you could see when you were marching was a rainbow of umbrellas and ponchos.

Everyone had smiles and hopeful looks on their faces and you could feel the unity amongst everyone huddled together in the cold and rain. It gave hope for a future where we would all stick together despite the harsh conditions.

During one of the speeches earlier in the afternoon, a woman behind me had dropped the lens to her camera, and after I picked it up for her, she showed her gratitude by taking a ring off of her finger and placing it in my palm and giving me a sincere thank you. This small act had such an important impact on my experience from this day. It made me realize that kindness is absolutely everything, and that the power really is in the people.

We, the youth, are what make up this high school, this city, this state, this country. Despite possible doubts from adults about the significance of our influence, we do have the power of our voice and kindness to create the change we want to see in our future. Walking alongside thousands of people showed me that we should, and must, act on this power.

Like one of my favorite signs from the march said: “We are the ones we’ve been waiting for.”

Regardless of opinions on the recent election, we must rally together in any way possible and not let our differences divide us. We must come together and support the women, and the Black community, and the Muslim community, and all other minorities.

“Because if you add up all of the women, all the minorities, and all of the people that have been pushed to the margins of society, then together, we make up a clear-cut majority,” said Julia Serano, a trans activist and speaker from the rally.