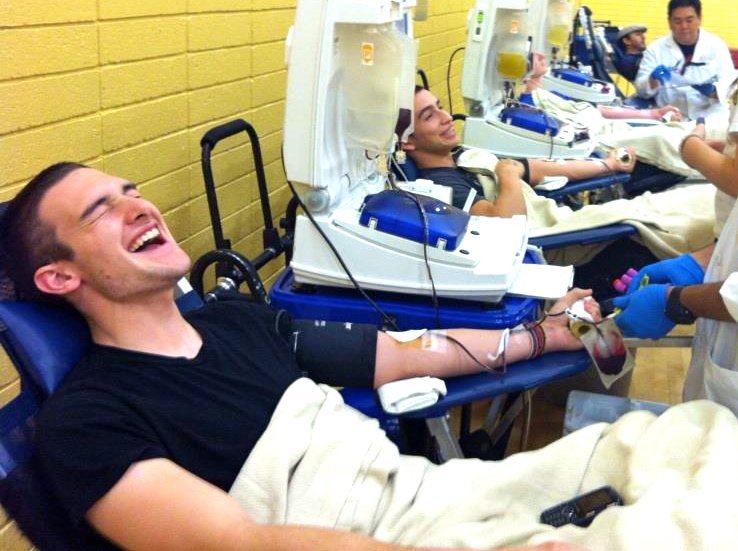 Senior Nico Nagle squirms in agony as his blood is made into a vampire treat.

Four years ago, after three traumatic hours spent in a theater watching Twilight, I committed myself to the sport of vampire slaying. It is not an easy lifestyle: I have toiled many hours collecting bloody cylindrical cotton swabs (“vampire bait”) from trashcans in the girls restrooms (for it seems boys are less disposed to nosebleeds). Though I have yet to slay my first vampire, I am learning.

This year, as Halloween rolled around, I decided it was time to think like a vampire. And so I bought a $2000 casket, closed the lid and used my imagination. Hours later, I was struck by a stroke of genius: where else would a vampire lurk but a high school blood drive?

Fast forward to November 20th, 2012. Excusing myself from fourth period, I made my way to the gym to investigate the vampire situation. The donation staff were suspiciously unprepared for an impending vampire assault: they openly flaunted bags of blood, labelling each with health information in the same way one would label a bag of fruit snacks. Upon investigating, I was told that the negligence did not stop there: these workers went so far as to screen out donors with diseases. Can you believe that? They might as well have been paying for premium vampire health insurance.

And that’s when it hit me: this blood drive was naught but a Thanksgiving food drive orchestrated by philanthropic vampires.
These so called “medical professionals” continued to pester me with propaganda, trying desperately to obtain a pint of my blood.

“If you’re really concerned that things aren’t going to go well, you should wait until you’re older to donate blood,” said one anonymous Stanford Blood Bank nurse whose nametag read ‘Kelly.’ “A lot of people are just afraid of the unknown: they’ve never [donated blood] before so they don’t know what to expect. You want to encourage people to donate, though, because it saves lives.”

I was shocked. Hundreds of Mountain View students were donating blood to save vampire lives? My shock was only compounded when I ran into MVLA district superintendent Barry Groves, right as he was leaving the small gym.

“I like to donate blood every time students have the blood drive to support what they’re doing. I think it’s a good cause, and it’s a good thing to do. Everybody should consider doing it,” Groves said.

I was infuriated. But before my anger could culminate in any awesome acts of vampire slaying, I was distracted by a nurse tapping on my shoulder.

I spent the rest of my time in the small gym camped at the snack table in the back, a perfect vantage point for monitoring Vampire activities. Yet for all my efforts, I could not detect a single vampire that entire period.

You win this time, vampires.

*Disclaimer: This article is fictional.*