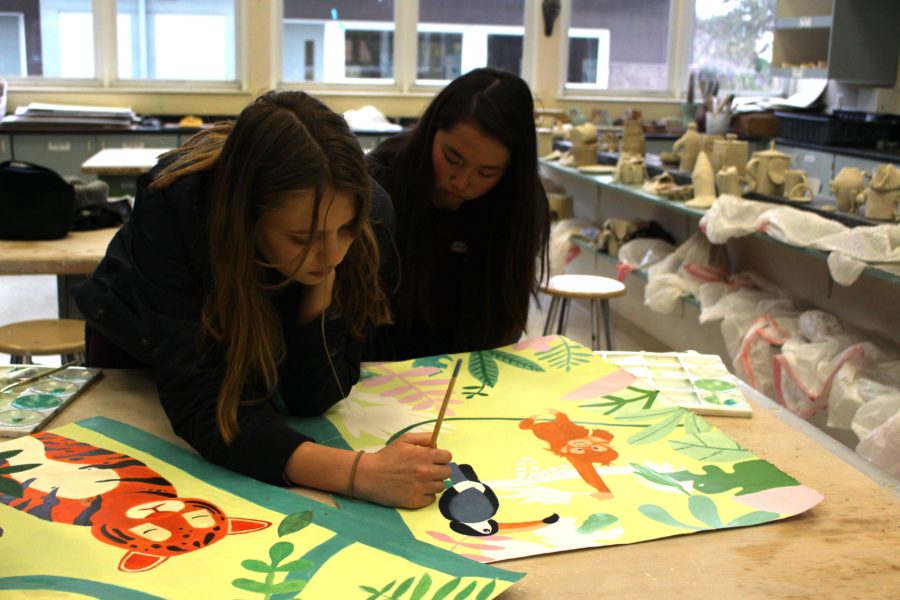 Senior Emma Lewis first came up with the idea of creating a mural when she was chatting with her aunt, a special education teacher in Monterey, California. Realizing that she would be unable to create a mural alone, she brought the idea to The National Art Honors Society, an art club at the school. To her, the collaboration seemed like the “perfect opportunity” for the club to make an impact on the community.

NAHS members have spent many lunches for the past several weeks working on the piece, which depicts a jungle-themed drawing featuring intricate green fronds framing a toucan, a monkey, and a chameleon. The mural will go up in the special education classroom in Monterey. According to Lewis, the group decided on the theme because one of the students in her aunt’s classroom is calmed by animals. The painting is based on an image the club found online that they had adapted to their personal preferences and styles according to Lynae DeKlerk, senior and club president.

According to DeKlerk, the purpose of NAHS is to spread art around the community and to her, the mural is just one way of doing that. The goal of the mural, in particular, DeKlerk said, was to make the teacher’s classroom look much more “happy and lively.”

“I was surprised by how many people came out to help [paint],” DeKlerk said. “It was really nice to see.”

One of the many people who helped was sophomore Mandy Lai, who said her favorite part about working on the mural was interacting with people in different grades than her and “getting to know more people.”

“Seeing it go from nothing to this beautiful mural was really fun,” Lai said.

Lewis also said one of her favorite aspects of creating the mural was being a part of an influential piece of work.

In order to transport the mural, the club cut the image into three parts that each got it’s own 2 feet 6 inch by 3 feet 7-inch paper. According to DeKlerk, this also allowed multiple people to work on it at once, which the senior said was her favorite part.

“Everybody put a little bit of their own style in with the colors they chose and how they drew different things,” DeKlerk said. “It looks really good together, and the little pieces that everyone put in of themselves is what makes it from us.”

DeKlerk added that the club initially proposed creating a mural on campus, however, she said they were unable to make much progress due to pushback from administration. Still, DeKlerk said she has learned a lot from what the club has been able to create.

“I learned that it takes a lot longer to paint a mural than expected,” DeKlerk said, laughing.

In the future, the club hopes to continue to spread art around the community and plans to do a painting lesson where students can teach their teachers according to DeKlerk.