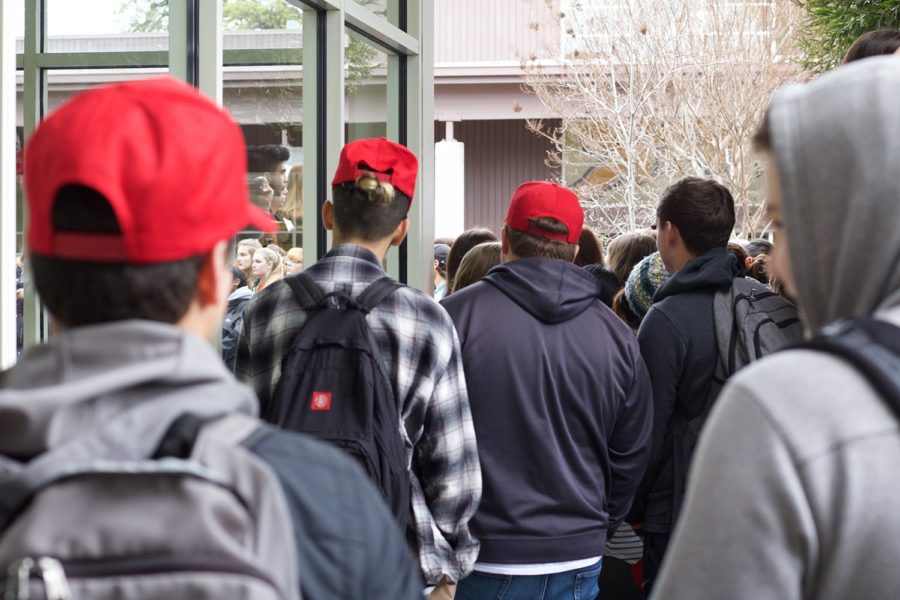 A student was suspended yesterday after he took “Make America Great Again” hats from a group of students wearing them and threw them into a patch of mud.

The incident occurred in the quad at yesterday’s #Enough Mountain View High School and Community Walkout, where a group of five students gathered peacefully on the outside of the event while sporting the bright red hats commonly associated with President Donald Trump.

Among them was junior Luke Olslund, who described the group’s presence as a “protest of the protest.” He said that by wearing the hats, which they planned to do about a week in advance, they intended to represent opposition toward stricter gun regulations.

Sophomore Noah Morris and junior Tevanui Freitas, also among the group of hat-wearers, said they attended the walkout to listen to speeches and hear opposing perspectives on gun control, although they believe mental health issues are at the root of gun violence and advocate for different preventative measures.

“What happened in Florida was terrible,” Morris said. “I wanted to hear people’s opinions about how to change it and what we should do so it doesn’t happen again.”

Olslund, however, said that because the group stood apart from the event, it was difficult to hear the speakers and the speeches did not influence the group.

After the speeches ended, Morris and Freitas said they moved with their group toward a more central area in the quad to engage in discussion about the event.

Senior Emily Vastano said she saw the students in red hats talking on the grass when senior Andrew Tey approached them, and she watched, “shocked,” as Tey removed one of the hats and placed it in the mud. A small crowd cheered him on, eyewitnesses said, as he proceeded to press the hat into the ground with his feet.

As Olslund watched, he worried Tey might approach him next and began putting his hat into his backpack. Tey then returned and, according to Olslund, said, “Why don’t you take that hat out of the backpack.” At that point, Olslund said Freitas approached Tey, and eyewitnesses said a teacher attempted but failed to stop Tey as he removed Freitas’ hat and stomped on it in the mud as he had with the previous one.

Freitas then brought Principal David Grissom to where the incident had occurred, he said. After it was over and most students had left the quad to attend fourth period, senior Ella Wiborg said she watched Grissom pick up the muddy hats.

As punishment, Tey said he received two days of suspension on grounds that he “caused or attempted to cause damage to private property” and “disrupted school activities,” and was told he must compensate the students for the cost of the hats.

Assistant Principal Teri Faught, who was present at the walkout but did not witness the incident, supports the consequences administered to Tey.

“Hostility toward anybody is zero tolerance here,” Faught said. “I trust my team in how they handled it because to me that represented exactly what we stand for.”

Tey was aware of what the consequences would be and chose to act because he is against what the red hats represent, he said in a statement sent to Oracle, stating his actions were “conscious and non-impulsive.”

“Especially in the context of a rally against the Republican-abetted slaughter of schoolchildren with exceptionally deadly weapons, the wearers were clearly not intending to engage in rational good-faith debate,” Tey said in the statement. “Wearing the red hat to such an event was nothing short of malicious.”

Freitas said he and the four other hat-wearers were there to grieve the 17 lives lost in the Parkland shooting, and to show the crowd that other perspectives on the gun control debate exist; Olslund agreed that the counter-protest became a way to represent his opinion as he learned more about the debate, but said wearing the hats was originally intended to be a “joke.”

Tey chose to target the hats because he “meant no bodily harm to the students.” Those around Freitas were “shocked” when Tey took the hats, he and other eyewitnesses said.

“I thought Mountain View was a safe place,” Freitas said. “That’s why we wore the hats.”

Teacher David Campbell did not witness the event but saw the students in the hats standing and talking amongst themselves before Tey had approached them. He said he thought the counter-protest was “a little antagonistic,” but supports the right of the students to express themselves.

Others have also argued that Tey’s actions constituted limiting freedom of speech, a stance that Tey is aware of. He holds that he violated only school rules and not the First Amendment’s protection of free speech.

“An individual’s freedom of speech is only protected from government limitation. The First Amendment does not prevent me from responding to unacceptable forms of speech,” Tey said in the statement. “Upon weighing what I felt was a moral imperative against potential disciplinary consequences, I found myself compelled to take a stand rather than stand idly by.”

Freitas said he has received support regarding the incident from Grissom, Superintendent Jeff Harding, and the teacher who attempted to restrain Tey; he also filed a police report on the event.

Eyewitnesses Wiborg and Vastano, along with Faught, said they felt saddened by the incident, which they thought was harmful to the positive school culture that was otherwise fostered at the walkout. Vastano noted that a walkout speaker specifically told the crowd before the incident that it’s important to acknowledge other viewpoints on gun control and not dismiss the holders of such viewpoints as “bad people.”

Vastano felt “disappointed” because she thought the incident went “directly against” those sentiments.

Andrew Tey is a member of the Oracle staff but was not involved whatsoever in the reporting of this story other than by submitting a written statement. His views and comments quoted in this article do not reflect those of Oracle’s.