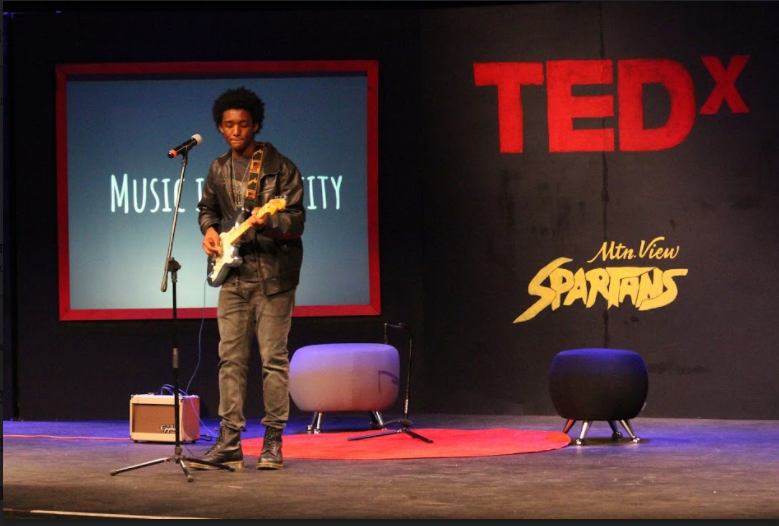 Friday’s third annual TEDx Mountain View High School featured talks from students and guest speakers on a plethora of topics, from how to be happy to women in tech. The student-run event also integrated creative performances such as slam poems, dances, and other musical performances into their lineup.

Organized by a crew of 14 students and club advisor Cecilia Quiñones, the event consisted of six student speakers, five guest speakers, three performances, two TED videos, and concluded with a panel where the audience had the opportunity to ask the speakers and performers about their talks and performances.

“[TEDx] is a great platform to share ideas and offer students the opportunity to speak [and perform] … I really liked that about TED in general and I wanted to be a part of it,” TEDx Executive Producer Cathy Zhang said.

Devoted to “ideas worth spreading,” the nonprofit organization TEDx is a branch of TED, with “x” standing for independently organized TED event.

Despite the large amount of work and time that it took to be a student speaker, junior Naya Chang said that she would recommend the experience to other MVHS students, as the process of writing her speech “Combatting Nationalism by Loving America” helped her understand her own system of beliefs and solidify her own worldview.

“I feel like a lot of people have ideas, but … if you write a speech or even just an essay on it, it really helps solidify what you actually think,” Chang said.

Each aspiring student speaker had to audition with a three-minute speech. If they were selected, they chose an advisor to work with to develop their speeches and spent months writing, editing, and rehearsing.

Chang’s speech argued that despite America’s complex and flawed history — such as the founding fathers’ ownership of slaves and negative racial attitudes across the country — it is still possible to have pride in America. Chang said in her speech that just acknowledging the country’s flaws, or simply commenting “America is so racist” as an end-all to political discussions, does nothing to foster change. She advocated for students to see America’s flaws and consequently act upon those realizations. In this way, as the title suggests, she said she found a way through which she could love America.

While Chang has had previous experience with stage performances as a dancer, she said she still felt nervous speaking at TEDx. Despite her initial anxiousness, however, she said she felt like her talk went well and was proud of her performance.

Zhang said the event came together with the help of their first-time club adviser Cecilia Quiñones, who was a “great adviser in supporting [the crew]” and allowed for many of the students to “exercise their own leadership and ideas.”

Viewing of TEDx Mountain View High School was open to all MVHS students. Freshman Danny Donahue said he attended because he was interested in hearing the views of both the student speakers and the guest speakers, whereas sophomore Jenna Cover specifically liked the student speakers because she enjoyed hearing “what teens view on actual, meaningful topics.”

Another student attendee, senior Lucas Sherrill enjoyed the dance performances by sophomores Maycie Garcia and Ninava Sharma, and said that he was glad he received the opportunity to listen to thoughtful and insightful talks by attending. All of the talks and performances will soon be available for viewing on the TED website at https://www.ted.com/watch/tedx-talks and on YouTube at https://www.youtube.com/user/TEDxTalks.